A couple of years ago I wrote a post about 30″ of snow hitting the Northeast and the back-breaking shoveling that took place at my house. The post was about contrasts: the amount of sweat and toil I invested in my hard work versus the money my neighbors spent on plow services.

Living in a wealthy section of town when you’re not wealthy can do that to you. When I’m in the yard, I frequently feel the gaze of my neighbors  and hear their imagined voices. “Look at his ugly grass.” “Wish they’d invest more in that siding.” “When are they ever going to cut down that dying tree?” But those are my own insecurities talking. They are the voices we all get in our heads when we imagine others are staring at us, judging.

And so what do I do? I judge back. “Look at them with their fancy plows. Never do a day’s worth of hard work in their lives.” That’s what my original post was about: judging the character of others based on a common household chore.

Anyone who lives in the Northeast knows that this past week and a half has been monstrous. In our town, we got about 20″ of snow in blizzard conditions early last week, followed by an additional 8″ this week from a Nor’easter. So my wife and I found ourselves outside on at least 3 occasions, shoveling the walks and driveway.

I listened really hard, but I didn’t hear them. I didn’t hear the voices of disdain and condemnation from my neighbors. Instead, I heard the soft crunch of the shovel meeting the snow, the soft whistle of the wind, the creek of the swaying pines. (Punctuated by my old-man grunts as I hurled snow from the path. Yet another sign of my age.) But there was no inner voice imagining what the neighbors were saying. My eye didn’t drift down the street to see if I was the only one hard at work. I didn’t glance over at my neighbor’s already-plowed driveway with envy and frustration.

I was hard at work. My wife was hard at work. It was us, the snow, and teamwork, and I reveled in it. I could feel my body hard at work. I could feel the beads of sweat. I could feel the world around me. I felt accomplished. I looked over at my wife, and saw her toiling just as much as I was, and I knew that I had a true partner: someone ready and willing to do the hard work needed so that our family could survive another day. And I saw my son, 8 years old, picking up a tiny, forgot shovel and pitching in, moving whatever snow he could from the path. I knew we were setting a good example. 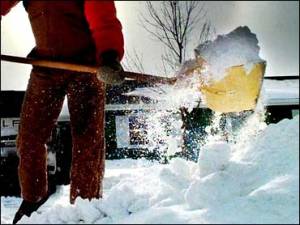 Some of you may have noticed that parts of the East Coast are getting a bit of snow today, as a blizzard is forecast to hit the Northeast.  As much as 30″ of snow is expected and, unlike my neighbors, I’ve got my shovels ready.

I’ve mentioned before that my family inhabits the smallest house on the block, a tiny cape home overshadowed by the McMansions down the street.  It seems as though each of these mini-fortresses is served by an army of service industry people: house cleaners, landscapers, contractors, handy-men. They even have their groceries and dry cleaning delivered.  I have only seen one other person in a couple block radius mowing his or her own lawn in the summer, which I’m sure will launch another post come June.

The same is true for snow removal.  I always shovel out my own driveway.  I should say WE always do it, because my wife is always there with me, each of us starting at one end and meeting in the middle like a cold, suburban version of Lady and the Tramp.  Our son gets suited up and runs around making snow angels and occasionally pelting us with snowballs.  It’s hard work.  We sweat and get nasty.  But we also have fun, and finish up with a sense of pride and a cup of hot chocolate.

As I get older, I realize that a lot of my pride is tied up in domestic labor.  Whether it’s good or bad I can’t tell, but somehow it speaks to my sense of manhood.  I like being the one outside working on the house to make life better for the family.  I like the idea that my son is watching me work hard, break a sweat, and get a job done.  I remember watching my own dad do it.  He seemed to know how to do everything.  He did all the mundane stuff like lawn mowing, snow shoveling, and landscaping, but he also built swing sets, tree houses, and even two additions to our house!  I remember watching him and being in awe.  I didn’t understand how he came to know all he did about electrical, plumbing, and carpentry, but I wanted to be that knowledgeable one day.  I wanted to be able to do what he could do.

I think that’s why I’m so fixated on doing things around the house myself.  I want my son to see me out there working.  I want him to see that he can do things for himself one day.  That he can learn to take care of himself and his family.  I make attempts at joining him in that work, like when we built a tree house together with less that optimal results (see my previous post).  But I try anyways.  It might seem prideful, but there’s a part of me that wants my son to think I can do anything.

So, when I see other houses calling in the snow plows, I experience an odd mixture of pity and resentment.  Their kids don’t get to see their parents struggling to contend with the snow.  Don’t get to join in the fun and toil.  Don’t get to share in a well-deserved cup of hot chocolate.  There’s also a self-centered part of me that resents seeing the plows because I believe everyone should think the way that I do.  That they should all want to be outside doing things for their house on their own.  I’ve read posts by dads who praise hired help because it gives them more time with the kids.  I can respect that approach.  If I had back every hour spent cutting the lawn or shoveling snow, I might have used it to have more fun with my family.  And granted, my neighbors probably have a lot more time freed up to spend with their children.  That’s probably part of the resentment I feel as the flocks of snow plows or pick-ups head down my street.

But for me, I like doing it myself.  I like the sense of accomplishment, and I like the message it sends to my son. That each of us has a responsibility and a role in keeping the family going, in fixing what is broken, and in cleaning up our own messes.