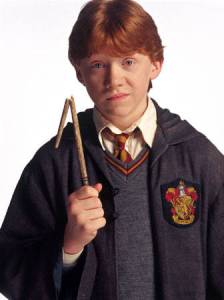 As effective in an argument as Ron Wesley with a broken wand.

It all boils down to this: Ron Weasley did NOT enter the Forbidden Forest in the first Harry Potter book when Harry and Hermione served detention with Hagrid.

My wife and I have an ongoing joke that when there’s a factual dispute in the house, and our recollections on a topic differ, she’s correct 99% of the time.  Whether it has to do with directions, someone’s name, or a piece of movie trivia, she tends to be correct…always.  At least that’s what she says.  If I had to admit it, I’d say she’s right.  In my family, if there’s a factual dispute and it turns out one person is correct, the winner points at him or herself with their thumbs and intones, “ding!” as though we’re on some perpetual game show.  Let’s just say that I get to “ding” very infrequently.

I bring this up because my son has jumped on this train wholeheartedly. With most things, he tends to side with his mother.  Usually it’s around things such as tastes or preferences.  Dad likes goat cheese, mom hates it. Ergo, my son hates it.  Mom loves vanilla ice cream, dad thinks it’s boring. What’s our son’s favorite ice cream?  Vanilla.  It’s gone so far that when a new type of food is introduced, I’ll ask my wife to withhold her assessment, and get my son to weigh in.  He might say that yes, he likes Twizzlers.  Then I’ll agree that Twizzlers are great, but my wife will say she hates them.  My son will pause and then say, “On second thought…”

Now that he’s watching more movies and TVshows with us, my son’s begun chiming in more on media-related disputes.  It’s not surprising that he jumps into my wife’s camp at nearly every turn.  It makes sense. He likes liking what my wife does, so why not agree with her on other things too.  I think he’s also playing the odds.  How could you blame him?  I mean, he’s been around enough to see who gets the most “dings”, so why not play for that team?

So we’ve been plowing through the Harry Potter books.  We tried when my son was about 4, but at the time, his limited attention span for reading long books got in the way.  We held off on any of the movies, wanting him to be able to read/listen to the books first.  About 4 months ago we started reading the books, and following up with a movie any time we complete a book.

At one point we were reading the Chamber of Secrets and got to the part in which Ron mentions that he’s never been in the Forbidden Forest.  My son sits up and asserts that Ron had been in the forest in the first book.  My wife agreed.  They insisted that Ron went in with Hagrid and Fang for detention.  I said that was just the movie, and that Ron was injured with something in the infirmary.  I was hazy on the details, so couldn’t assert a good story.  They balked.  There goes dad again, all turned around.  The synergy of their mutual agreement magnified their assertion.  “No, he TOTALLY went into the forest.  JK messed up on this one.”

I kept reading aloud and ignored them.  Even when I think I’m right about things, there’s always this voice inside that says, “…but probably not.  You know your record.”  I forgot about it.  A few days later my son was watching the Sorcerer’s Stone again, and there’s Ron in the forest.  “See Dad, see!” my son called. “Yep,” my wife agreed.  I fetched the book and found it.  Ron had been bitten by Norbert and was in the infirmary when Hermione, Harry, Malfoy, and Neville were caught and sent to detention.  The movie changed the scene. Ha ha! “Ding!”

Here’s the funny thing about this little family narrative about dad being wrong 99% of the time: I don’t mind it.  I grew up as the oldest child of four, and with that came the bravado and smugness of being the eldest.  I was always older, taller, smarter…and always right.  It’s not a good situation for practicing humility.  So, for much of my life, I think I’ve walked around thinking that I’m right about most things.  (Having two narcissistic parents only inflated those feelings.)

But I’ve found that one of marriage’s major lessons is humility.  That you’re not always right, and better yet, you shouldn’t always be right.  It’s taught me to slow my roll when I think I’m beyond reproach.  Even though I like to ham it up and give my wife a hard time when I think I’m right, I know that I’m just playing a game.  I know that I’m not always right, and it helps me to hear the other person’s argument a bit clearer.  Now my son gets to see me being wrong, and that’s okay.  I want him to see that I can be wrong and bow out gracefully.  I think it’s an important practice in humility and admitting that we can’t always be right.

And yet, in those 1% of times when when I am right, I can bask in the glory of it and “ding” with flourish. 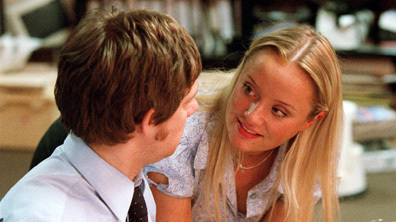 Yes, my cable is dead.  After many disputes with the cable company (and some dodged charges), our family’s cable shut off tonight, and we are left with internet-based media.  This evening, after my wife went to bed, I discovered that hulu plus carries the entire series of The Office, and I was in heaven.

I was/am a huge fan of the original BBC series, and own all the episodes, but seeing it there on hulu tempted me.  That and the fact that I decided to take a rare “sick” (mental health) day tomorrow from work and felt entitled to stay up late and watch whatever the hell I wanted to watch while eating cake.

This is the thing about The Office: it possesses the rare power to make me cry.  It’s very seldom that I shed tears, even during the most catastrophic times in my life.  But somehow, watching other people’s joys and miseries play out on the screen makes it easier for me.  Perhaps it’s because there’s some distance from the characters and situations, and so it feels safe.  When I shed tears for TV or movies, I’m crying for someone else, because their life is shit or overwhelmingly heart-breaking.  If I cried because something in my life was shit or heart-breaking, it would feel too vulnerable, too raw.  It would signify that I couldn’t “fix” that thing in my life.  TV and movies are safe.  I can shed tears and feel badly for that character, but maintain the sense (illusion) that I have my own shit together and can fight another day.

The “Specials”, as they’re called, are where I really lose it.  The Specials are the last two episodes in which the cast returned for their final goodbyes.  For those of you not familiar with the series, Tim Canterbury (Martin Freeman) is the lovable lost-soul of the office who’s infatuated with Dawn Tinsley (Lucy Davis), the sad aspiring illustrator stuck in a reception job at Wernham Hogg, a paper merchant.  Tim pines over Dawn in a very subtle, tortured way over the course of the season, making two bids for her affection, both thwarted as Dawn inevitably chooses Lee, her doltish, perpetual fiance.  Viewer like me watched in anguish throughout the season as funny-man Tim quipped with Dawn and nudged her toward fulfilling her hopes and dreams, while she was pulled down (and away) by Lee’s subtle insults.

The Specials picked up two years after the series ended, to find Dawn living in Florida with dead-beat Lee, mooching off of his sister, while Tim remained in Slough, brow-beaten by impish Gareth who now manages the branch.  The “documentarians” offer to fly Dawn and Lee back to Slough for the annual Wernham Hogg Christmas party.  Dawn and Tim are painfully reintroduced, but they quickly fall back into their comfortable way with one another.  Their short reunion is emblematic of everything wonderful about their relationship: Tim saves Dawn from suffering through office chit-chat, the two poke fun at Gareth, and Dawn draws a portrait for Tim.

It’s those last 45 minutes when I as a viewer am not able to hold it together.  (I would write SPOILER ALERT, but anyone who would stick through the last 500 words is probably already a fan of the series).  At the party, Lee bad-mouths Dawn’s artistic abilities before ruining one of Tim and Dawn’s private jokes and whisking her away from the party in a cab.  As she rides away, Dawn opens up her Secret Santa from Tim, to find an oil painting set and the portrait she drew of him with the words “Don’t Give Up” written on it.  We find Tim later at the party talking to David and Gareth when Dawn returns, kisses him, and the two leave the party hand-in-hand.

And I lose it.

I’ve seen the episode about eight times, and lose it every time.  Tonight I was left alone in my living room at midnight wondering why this always happens to me.  After all these years, I still can’t help but cry when these two connect.  And then I understood.  I see myself in Tim.  He’s somewhat shy and self-conscious.  He tries to be funny, in spite of how down-trodden he feels about his own life.  And he’s rubbish around women, especially Dawn.  He pines for her throughout, but can’t make it past the jokey, supportive friend phase with the woman he loves.  That’s how I always was with women.  I was the shy, quiet guy who wouldn’t stick his neck out for fear of being shot down.  For fear of being hurt like the times Dawn hurt Tim.  It’s a miracle I’m now married and have a child.

But why am I married now?  Because I found my Dawn.  On my first date with my wife-to-be, we went to a party.  I am crap at parties.  We sat separate from everyone, making our own little jokes.  Some harmless, some at others’ expense.  But they were our private jokes.  This became the hallmark of our relationship: we can always make each other laugh.  Not only that, but we can pick each other up when the other one is feeling down.  We can praise one another for the talents we each possess, and inspire the other to always keep trying.  These are the things that are important in a relationship, and we’re lucky enough to embody them.

I realize that nothing in this post is about fatherhood.  But my relationship with my wife is the core of our home.  It’s the example we set for our son about love and fidelity and joy.  Just like my inability to cry about myself or my real life, sometimes I’m perhaps stifled by the “realness” of everything around me, by the nitty-gritty of everyday life.  Sometimes it takes seeing characters on the screen to get some distance and see what is sentimental and good.  But it’s only because I have something good in my own life that the tears flow when I see Tim and Dawn walk out of that party.  I realize that I’ve walked out of the party with my own wife, hand-in-hand, into the real world where we’ve made a life for ourselves.  And I realize that I’m a very lucky man, and a lucky father.