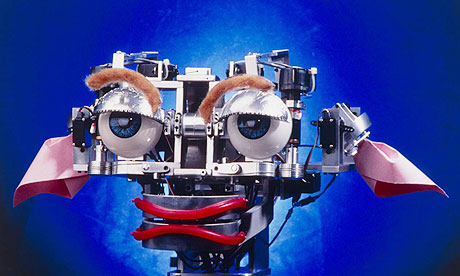 Sometimes I have no fun at all, and sometimes it’s my own damn fault.

Random groups of children and parents set the stage for some of my most frustrating experiences. For instance, this April vacation, my son and I had some alone time and planned a day around robots. A local museum was hosting free guided tour of its robotics exhibit for kids and families. The issue was that it was free and first-come-first-served to only 25 participants, which was a set-up for all sorts of anxiety.

My son and I made a day out of it. After taking the train early and having breakfast, we charged through the rain and stood outside of the still-closed museum under an awning. Eventually making it inside, we had to wait until 30 minutes prior to the tour to receive a free ticket. We scoped out the reception desk, and at exactly 10:30, they started giving tickets away. Someone’s dad cut in front of a line that included me and women with strollers. I was mildly annoyed, but got my tickets and we waited.

When the tour started, they cordoned off the entire wing, so that only tour participants could take part. We felt very special. The tour started well, with the curator giving the kids stickies to put on the exhibits they found most interesting and most scary. I noted that the tour seemed small, with only about 20 people. Finally, about 10 minutes late, another family of five, a mom and her 2 pre-teen girls and 2 teenage boys showed up. Her kids started on the periphery of the group, while she found a bench all to herself, staring at her cell phone.  It took about 5 minutes for her girls to stray from the group and wander the deserted hall, and after about 10 minutes her boys followed suit, until the entire family was doing their own thing and mom was staring at her phone.

About 30 minutes into the tour, that family left the exhibit, never to return. I was left up on my moral high horse, alone with my frustrations.

The issue with being up there on my moral high horse was that I wasn’t down in the tour with my son. It was hard for me to put away my anger and instead focus on the fun that was happening right in front of me. This happens to me a lot, especially around children and their parents. Inevitably there’s somebody that’s out of control or at least troublesome: the kid who runs around, or disturbs the group, or makes fun of the exhibits, or barrels over other kids. But that’s not the unnerving part; after all, they’re just kids. In most cases, these kids are chaperoned by parents who aren’t doing anything. They sit back on their phones, or appear oblivious, or throw their hands up with a “whatcha gonna do” face. This is the thing that drives me bonkers.

“We live in a society, people!” my inner George Costanza screams. The only way to enjoy the fruits of society is by sharing them. When parents don’t teach their kids to share space, time, and resources, then kids become self-serving, domineering adults. And so standing in that tour group, my mind wanders to the future; to these kids growing up and populating a world where my son has to share the highway with them as they swerve through traffic, or stand in line while they cut in front for their morning coffee, or work in an office where they steal his ideas and pawn them off as their own. I think of a million different scenarios about how the world is (and will) become a worse place because kids aren’t taught about how to respect others.

It all sounds very good as a write it. In fact, there’s a part of me that wants to stop there. End of post. People suck.

But what I’m really trying to convey is the way I feel obligated to be the morality/karma police in these situations. Looking around the tour group, there were obviously children who were participating, and their parents appeared just as engaged. Even the curator seemed to be ignoring the wandering family and going about her business, touring the group. Why was I the one steaming? Why did I feel as though I had to hold the weight of other people’s decisions?

I think that is the hardest part for me. I don’t want to lose that part of me that discerns behaviors that I don’t want to cultivate in my son. I also don’t want to be so fixated on that discernment that it takes over my mind and disallows me from enjoying the moment in spite of others. I’m sure the other parents in the group noticed this wandering family. I’m sure some of them even made judgements about their behavior. But somehow, they were able to live and let live, or perhaps even forgive and forget. For me, it never feels easy. 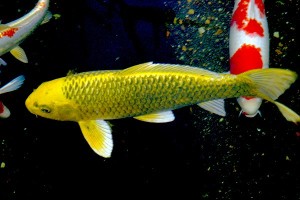 Coming home from a grueling day of work this past week, I found my wife sitting at the kitchen table with my son standing at her side. They stared at me, tears welling up in my son’s eyes.

“Bruce Lee is dead,” my wife said. My son burst out crying and nuzzled his face into my wife’s neck.

Bruce Lee was one of the four Koi fish we keep in our small backyard pond. The pond has been there since we moved in two years ago, but only last May did we buy four 5-inch long koi to fill the pond and, by the end of the summer, each was at least a foot long. Bruce Lee was named for his impressive golden scales with black trim, reminiscent of his name-sake’s iconic jumpsuit from the movie Game of Death.

Bruce Lee had been sick for a few weeks, and I made several efforts to help him, but his scales were inflamed and he lost his equilibrium at times. I was really torn up about him being sick, trying whatever I could to help a situation that might have been inevitable. I felt a great deal of responsibility to make it better.

But that day when I came home to find the fished had died, I wasn’t anguished by the news. In fact, it was a relief. I knew the ordeal was over, the pain that he might have felt was done. In fact, my only sympathies were for my son, who was devastated.  He was the one to find him dead, which was heart-breaking for him. I wanted to comfort him.

But instead of sitting with his sadness, I jumped into fix-it mode. I knew I had to get the fish out of the pond and into the ground before the sun went down. Right after dinner, I rushed my son outside so we could dig a hole and net our dead friend.

While waiting for my wife before the burial, my son wrote a letter to the fish. He asked me to contribute every other line, in a sort of joint eulogy. We wrote that we’d miss him, that the other fish would miss him, that we hoped he was happy in the big pond in the sky. After writing his final words, my son sank his 7-year-old face into my neck and burst into tears. I was surprised at how much this affected him, and had to take stock in the situation.

I have this tendency to compartmentalize sad feelings in order to get the job done. If something shocking or saddening happens, I somehow feel that it’s my duty to trudge forward. In these situations, it sometimes helps that I put aside my feelings so that things get done. For instance, there was a time when my son spews vomit all over the bed in the middle of the night, coating every fabric-covered surface in yuck. While my wife helps our son to the bathroom, I had the gross job of cleaning up. Or when the basement toilet backs up and spits sewage all over the floor, I’m the one cleaning up. When things are gross or shocking, I put away my feelings, put on my “man-hat”, and git-r-done. In these very practical situations, it works. Vomit and feces don’t pick up themselves.

But this same compartmentalization can happen when there’s loss, and the job needs to be done to pick things up and move along. I have learned the hard way that this is not the way to deal with grief. When there has been loss or great sadness, there are times when I cordon off my feelings and move forward. There’s a part of me that feels like this is just how I take care of others. I want to help get them to a better place. I want to show them hope. But in doing so, I can overlook the grief and the anguish, as though they don’t exist. My approach can leave others feeling unsupported and overlooked. Granted, sometimes there needs to be a pragmatic voice within a family when things are gloomy, but to charge forward solely in a utilitarian mode only denies others their sadness.

Charging forward also denies my own sadness. When I put my grief to the side in order to make things better, I don’t sit with the sadness of it all and end up feeling wrecked in the end, while my loved ones feel overlooked.

All of this came back as I sat at the kitchen table with my son, composing a fish eulogy. I had to take a breath, and sit with the sadness of a boy who had bought, named, and nurtured a 5-inch baby fish into a 14-inch glory. He was heartbroken, and I couldn’t go too fast. I had to sit with the sadness of it all. I had toforget the waning sunlight and the hardened ground and think about this small boy who had just confronted death face-to-face. Sure there was a job to be done, but that job was right in front of me: hugging my son and accepting his tears.