Rooster Cogburn is the character from the movie True Grit, originally played by John Wayne in 1969 and re-booted with Jeff Bridges in 2010. For me (sorry purists, and my own father), I’m focused on the Coen brother’s 2010 Rooster. Rooster is a surly old US Marshal who helps a young woman track down her father’s murder in the old West.  The thing I like about the character is that he’s old, and ballsy, and doesn’t give a damn about what other people think of him. He’s going to do what he thinks is right.  He doesn’t care about first impressions, or using the right words, or impressing the right people. He says what he means, even if he comes across as a bitter old coot.

I find that I really enjoy lots of old male characters who embody this same I-could-give-a-shit mentality in movies. Regardless of whether its Mickey Goldmill from Rocky or Carl Fredricksen from Up, I love these guys. It took some reflection for me to understand why. In my life, I feel I have to be on my best behavior at times.  At work, I have to play a role.  I have to be unflappable, and hold my cards close to my chest.  I have to bite my tongue and devise the best way of approaching a situation that takes into account all perspectives.  I have to sit on my anger when my boss is a douche.  I have to hide who I am to get through the day.

The same goes for being out in the community.  In a relatively small town, you have to hide your feelings at times. If a parent or a kid gets under my skin, I pretty much have to sit on it. The shock waves of disputes in a small town can reverberate, and I always have to think about my son. Not in a don’t-make-waves sort of way, but folks can be petty, and parents’ reputations certainly dictate how adults or other kids treat your child.  So, for all these reasons, I hold back on what I might think, or what I might like to say, in a very un-Rooster-ish fashion.

I want to blurt out.  I want to tell people to go to hell sometimes, but I don’t.  It’s sitting on these feelings that can tear a person up.  But it’s this act of blurting out that I see every day on-line.  Virtual life brings out the Rooster in many of us. Behind the veil of technology, many of us feel like we can spurt out whatever vitriol is in our blood, and throw caution to the wind. Many people let it all out and become crotchety old men on line.  I can see the intrigue. With a life of quiet repression, I can see how folks want to let it out on line. When first starting my blog, part of me wanted to adopt a pen-name personality that was crotchety.  A nom de plune that would be brash and rude whenever he felt like it. It was such an attractive option, the thought of having this outlet for telling people off. I ultimately decided not to go in that direction, because the things I wanted to write about were rather sentimental, and didn’t lend themselves to a shit-stirring ass of a narrator.

However, I’ve certainly read a few of blogs by shit-stirring asses, and I then see that the it isn’t so attractive from the other side of the page. These folks can certainly incite furry and debate, which is sometimes productive, but many are provocative for provocativeness’ sake. They just want to rile others up. I’m sure there’s some catharsis for the writer, being able to put out whatever hell-fire is on their mind, but in the end it’s usually just biting and self-indulgent.

And that’s not the allure of these old man characters that I love so much. It’s more so that they’re true to what they think and feel, even if it’s unpopular. They don’t spew out garbage simply because it’s on their minds, but say things they feel need to be said. 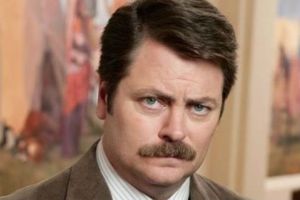 Perhaps the best example is Ron Swanson, the (not-so-old) city hall worker in Parks and Recreation, who sticks to his anti-government, meat-loving, gold-burying values. Although my leanings are very different from Ron’s, I absolutely love him. Ron is the type of guy who is frequently driven to contribute his thoughts by the ridiculousness or ignorance of those around him. He comes off as crotchety and even mean at times, but behind his words is a heart of gold. He says these things because he truly believes them and, when you get right down to it, because he thinks they’re important lessons for the people he loves.  And yet, he doesn’t punish others or hold them tightly to his values, but he makes a place to say them. I guess what I’m trying to say is that he sticks to what he thinks, but not without regard to others. He wants them to know what he thinks because it’s important to him, but also because he thinks it’s important for them and their well-being.

There’s certainly a fine line between being Ron Swanson and a domineering, shit-spewing, raving maniac. I’ve known plenty of people who trounce over others because they think they know what’s best.  That isn’t what I’m supporting or the type of person I want to be. But, at those times when I’m swallowing my own thoughts and feelings just to get through a situation, I do ask myself: What would Ron Swanson say?

14 thoughts on “I Wanna Be a Crotchety Old Man”